Recently I touched upon the importance of otter dietary assessments and the wealth of useful information that can be ascertained through such targeted studies. Before any such surveys can be undertaken however it is first necessary to confirm the presence of otters in your target area. Otters, particularly those that inhabit riverine ecosystems, are largely nocturnal and thus rarely encountered by man. As such physical signs of otters are often used to indicate their presence in an area as opposed to visual sightings. Among these signs, tracks, anal jelly and scat, otherwise known as spraint are the most frequently encountered and thus of the most use. Other indicators such as prey remains and the presence of holts may be used but for the purpose of this post we will focus on the former three. 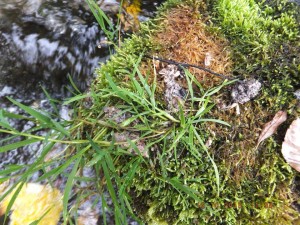 Of all the signs associated with the presence of L.lutra, spraint is perhaps the most readily encountered. Spraint is often deposited on prominent features near water, these often include, rocks, fallen trees, bridge supports and storm drains. Here the deposits act as scent markers to other otters and are used to define territories. Given their vicinity to water, spraints are prone to washing away during bouts of bad weather thus it should not always be assumed that the absence of samples indicates a lack of otters in an area. This is the main reason why otter surveys are undertaken over a prolonged period of time.

Spraints themselves are fairly easy to identify. Prey remains should be clearly visible in the sample with fish bones and scales usefully the most prominent. Crayfish remains may also feature heavily in areas where they persist and an array of other items may also be visible including the bones of amphibians, fur, feather fragments and insect remains. Providing the sample is fresh, all of these should be bound together with a tarry black mucus although as time progresses and the spraint dries out it takes on a much paler, almost grey colouration and a more crumbly texture. Finally, smell is often a good indicator that you a dealing with an otter spraint as opposed to the scat of other creatures such as Mink. When fresh, spraint ommits a distinct sweet odor that is not at all unpleasant. I even heard it compared to a cross between lavender and fresh fish, an odd combination if ever there was one but one that is actually rather fitting. 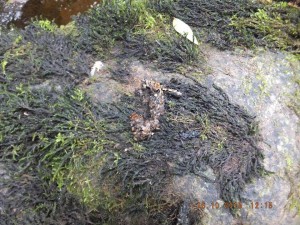 When searching for spraint there are however a few confusing items you should be aware of. Firstly, Mink scat may also contain fish remains alongside more prominent feather and fur remains. These can occasionally be confused with spraint but ommit a very unpleasant odor and display a clear tapering shape as opposed to more rounded otter scat. Due to their smaller stature Mink scat is also no wider than 1cm wide. Bird pellets may also confuse as these vary greatly in size depending on the species in question. Though these often contain very similar prey items they totally lack the tarry jelly that binds otter spraint and are usually totally dry. 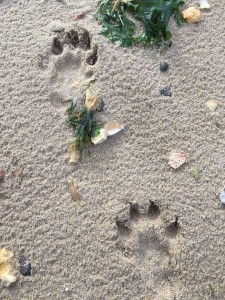 Finally we come to otter tracks. These are fairly distinctive and often encountered in areas made up of soft sand or mud. Otter tracks have five toes that arch around the front of a large pad. On occasion claw marks and webbing may also be present and it should be noted that from time to time only four toes may be visible, a factor which may lead to confusion with a number of other species including foxes and domestic dogs. Both foxes and dogs possess only four toes though given the above factor, when in doubt, the size of the print should be referred to. As a rough guide, the prints of female otters range in width between 5-6cm with males clocking in at a slightly larger 6.5-7cm and cubs at under 4cm. It is also important to remember that like otters, Mink also have five toes. Mink prints however are much smaller, almost star shaped and display much longer claws than otters.